Why We Incorporate Functional Ingredients Into Our CBD Products 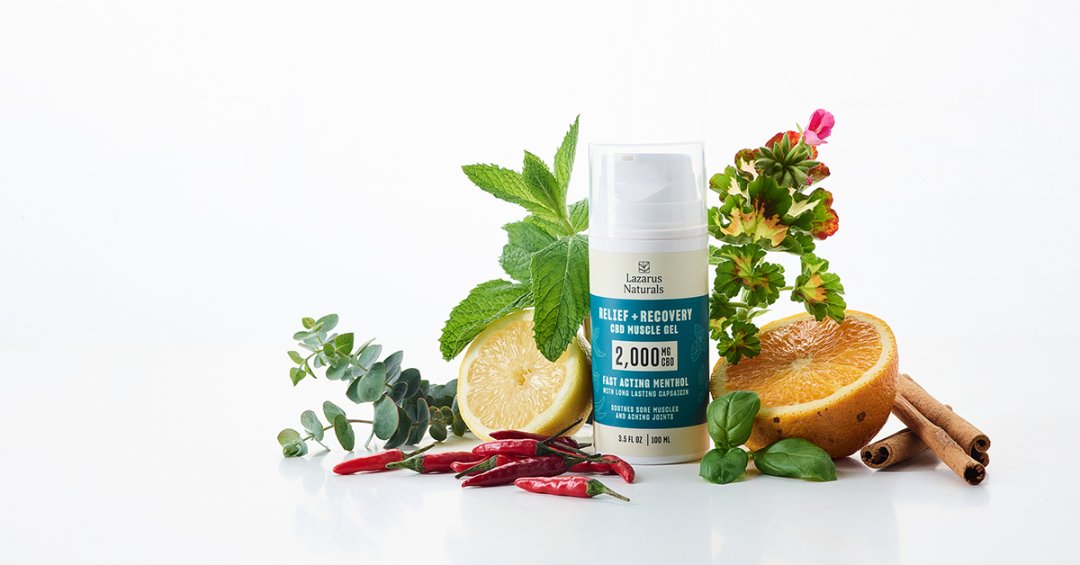 Therapeutic benefits along with a relatively promising safety profile and nonintoxicating effect have made CBD an increasingly popular supplement for issues related to acute and chronic pain, anxiety, migraines, and insomnia.

The incorporation of counterirritants such as camphor, capsaicin, and menthol is the gold standard in pain-relieving topicals. These ingredients provide a tingling effect that gives way to a sensation of warmth—distracting the mind from pain shortly after applying. Counterirritants are a proven and effective method to reduce pain and discomfort, which is why we always include them to boost the therapeutic benefits of our CBD Muscle Gel and Relief + Recovery Balm.

Capsaicin is a chemical compound found in the fruit of the capsicum (more commonly known as red pepper) that has been shown to alleviate pain in muscles, joints, and nerves—as well as reduce swelling—when applied to skin. Camphor is a similar counterirritant compound derived from the camphor tree, and used topically to relieve pain, irritation, and itch. Camphor has also been shown to have anti-inflammatory effects when used to treat arthritis.

Menthol is a chemical derived from the mint plant that promotes deeper, easier breaths. It is characterized by an invigorating cooling sensation when applied to the skin. This icy sensation can be effective for calming skin irritations and easing any associated pain or tension. Similarly, eucalyptus has a crisp, sweet, minty-pine scent—promoting easier breathing via bronchodilation (i.e., opening of the lungs). It has also been shown to have an analgesic effect if applied topically, making it a great ingredient for products crafted for pain relief.

Capsaicin, camphor, and menthol are incorporated into our CBD Muscle Gel and Relief + Recovery Balm—while eucalyptus is specific to the CBD Muscle Gel.

CBD can be combined with known sleep promoters for increased relaxation before bed to promote better rest. Lazarus Naturals Relax Capsules, Sleep Capsules, and Relax + Unwind Balm all incorporate a blend of functional ingredients—including chamomile flower, lavender, lemon balm, passion flower, ashwagandha, and melatonin—known to support sleep. Paired with full spectrum or CBD isolate, these relaxing combinations work to naturally increase production of vital sleep neurotransmitters and hormones (such as GABA and melatonin) and reduce anxiety before bed for a more restful night.

Chamomile is a traditional herb widely used in teas to help people relax and fall asleep. It acts as a mild sedative to calm nerves and lower anxiety. Studies suggest that the sedating effect of chamomile may be due to a flavonoid, apigenin, which binds to benzodiazepine receptors in the brain. Lavender is a natural herb historically and frequently used to reduce stress and anxiety, mainly attributable to the high levels of the terpene linalool. Lemon balm and passion flower are natural herbs used for centuries to aid with relieving stress, anxiety, and restlessness before sleep. Ashwagandha is a natural evergreen shrub that has demonstrated similar calming effects, and has been shown to reduce levels of stress hormones such as cortisol. Melatonin is a natural hormone that helps regulate your sleep-wake cycle and one of the most commonly incorporated functional ingredients in sleep therapies today. 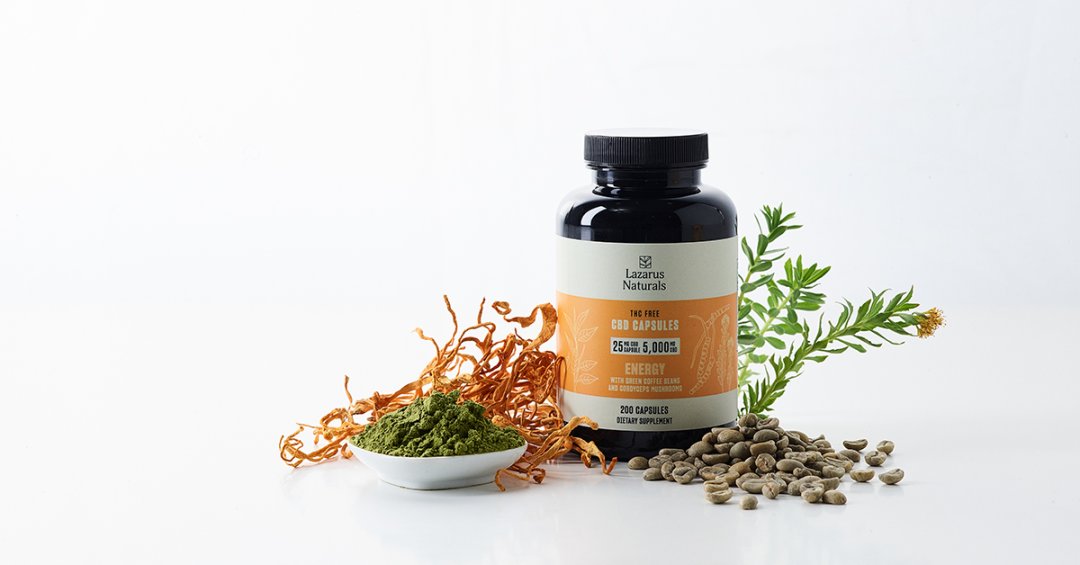 Coffee isn’t the only thing you can use to get your day started! Lazarus Naturals Energy Capsules pair THC free CBD isolate with supplemental ingredients—like caffeine (sourced from green coffee beans for a more balanced, less intense boost), vitamins B12 and B6, L-theanine (an energizing compound found in dark chocolate), rhodiola rosea (an herb found at higher altitudes that’s been used for centuries to combat stress), and cordyceps—for sustained focus and energy.

Caffeine is a naturally occurring stimulant that is commonly used to fight sleepiness and promote alertness. Some studies have suggested that caffeine increases adrenaline and overall brain activity. Most commonly associated with coffee, caffeine is also found in other plants such as yerba mate and guayusa.

L-theanine is a naturally occurring amino acid that can be found in green tea, black tea, and some mushrooms. It has been shown to affect chemicals in the brain that influence mood, sleep, emotion, and cortisol. It is primarily used to increase mental focus, aid in relaxation, and increase cognitive performance.

Vitamins B12 and B6 have been shown to boost energy, improve memory, and prevent heart disease. Both are essential to brain function and are crucial for maintaining the integrity and health of the nervous and immune systems.

Rhodiola rosea is an herb that helps us to react and adapt more readily when faced with physical, chemical, and environmental stress. It’s been used to help relieve anxiety, depression, fatigue, and headaches.

Cordyceps mushrooms are a traditional medicine that have become increasingly popular in modern health regimens. Reportedly excellent for fighting fatigue, the natural energy boosters have also been reported to offer antioxidants and anti-inflammatory benefits.

Other Ingredients That Improve Functionality of Lazarus Naturals CBD

It’s been shown that co-administration of CBD with lipids (i.e. fats or oils) significantly increases the amount of active CBD absorbed by the body. Softgels are formulated with organic flaxseed oil and organic coconut MCT oil to boost the bioavailability of the cannabinoids and to ensure maximum potency.

Several types of moisturizing agents can be used as methods for administering CBD topically. Different moisturizers offer various consistencies and textures, with each specializing in its own use cases. CBD Body Lotions are made with organic mango butter and aloe, for non-greasy application that absorbs quickly. CBD Balms include organic beeswax and lanolin (a permeation enhancer) for a more concentrated formulation, ideal for targeting specific areas in need of relief. While the smoothest, most massage-worthy experience can be found in our USDA Certified Organic CBD Body + Massage Oil—another great daily moisturizer option that leverages deeply hydrating jojoba and almond oils.